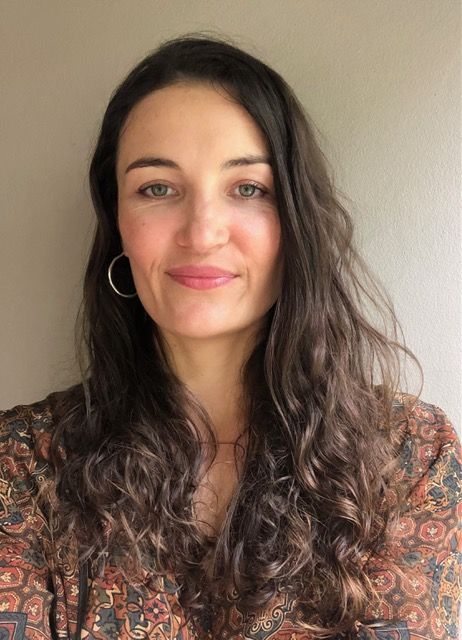 1. Simone, you, Ella Kurz and Claire Delahuntey are the editors of the anthology What We Carry: Poetry on Childbearing, a collection of contemporary Australian poetry on childbearing. How did the What We Carry anthology come about?

I met my co-editors Ella Kurz and Claire Delahunty through ACT Writers workshops when I was living in Canberra. Ella, who is a midwife and midwifery researcher as well as a writer, conceived the initial idea for the anthology while completing her PhD on women’s childbearing experiences. She found the academic midwifery literature lacked the language to adequately capture women’s interior experiences of giving birth. She turned to poetry for the first time and was profoundly moved by the birth poems she found. It took her a long time to locate birthing poems though, and she saw the need for an anthology collating these poems. She discussed her idea with Claire and I and we decided to create a poetry anthology together.

While there have been anthologies of Australian poetry published on related themes such as motherhood, we wanted to create an anthology focusing specifically on childbearing. Childbearing is quite a broad theme itself, and for the purposes of the anthology we adopted a definition which covers embodied experiences of infertility, conception, pregnancy, termination, loss, birth and the early postpartum period. We also included poems on the decision not to have children. We also decided to create an Australian anthology focusing on the voices of contemporary Australian poets and uniquely Australian experiences of childbearing.

Although many Australian poets have written beautifully on childbearing in their own individual books and collections, one of the reasons we wanted to create a collection of poetry on childbearing is that such an anthology is able to reflect a diversity of experiences and perspectives on childbearing and reveal how childbearing is profoundly shaped by its social and cultural context. There are poems in What We Carry by poets of a range of cultures, races, locations and landscapes (regional, rural and city), ages, gender identities, sexualities and with various experiences of health and ability. There are poets from at least seven Australian First Nations cultures exploring, among other things, how invasion, dispossession and racial violence in Australia has impacted childbearing experiences, families, and cultures. This diversity of voices and perspectives and the specificity of the experiences explored is what makes What We Carry such a strong and powerful collection.

2. What was the process?

We first connected with the Prime Minister’s Literary Award-winning Canberra poet Melinda Smith, who became our mentor for the anthology. Melinda recommended to us some Australian poets who have written about childbearing and suggested we contact them to request already published or new poems on the theme. She later advised us on structuring the anthology and helped us edit some of the submitted poems.

Our initial group of poets suggested other poets for us to contact. We also did a number of call outs via social media and email, in particular to networks where we could reach regional and rural writers and poets from various diverse groups and communities. The beauty and power of this anthology are largely due to the quality of the poems published within it and the generosity and guidance offered to us by the Australian poetry community.

3. Did you apply for grant funding? If so, which Arts body was responsible?

We applied for and were fortunate enough to obtain an arts grant from ArtsACT, the ACT government’s Art Agency. The grant allowed us to pay our contributing poets, to buy a number of books from Recent Work Press (many of which we used as contributor copies for our poets), and to pay our mentor Melinda, our designer Kasia Pawlikowski, and the illustrator Cinyee Chiu whose beautiful image we used for the book cover.

As poets and writers living in Canberra at the time, Claire, Ella and I were all familiar with the Canberra-based poetry publisher Recent Work Press and its reputation for integrity and publishing high quality poetry collections and anthologies. It was an obvious first choice of publisher for us. We invited Shane Strange of Recent Work Press to meet us at a café early in the process and pitched our idea for the anthology to him. Shane was enthusiastic about the anthology from the outset, which strengthened our confidence and resolve. Shane and his support were vital to the success of this project.

5. Has childbearing been given the attention it deserves in literature?

No. While there is a long history of writing about childbearing, especially since the second wave feminism movement in the 1960s and 1970s, unfortunately this body of work has not always been regarded as serious or high literature. In the introduction to What We Carry, we cite the infamous rejection letter that American poet Sharon Olds received from a literary magazine in the 1970s suggesting that she try publish her childbearing poems in the “Ladies’ Home Journal” and asserting that the true subjects of literature are “male subjects, not [her] children.” At other times, childbearing literature has been viewed as a niche area of literature only of interest and relevance to mums or childbearers themselves and not of universal appeal.

Thankfully, this is starting to shift across multiple genres of literature, and there have been many sophisticated books of nonfiction, fiction and poetry sharing embodied experiences of childbearing published in the last decade or so. These books are being reviewed favourably by critics and are enjoying widespread popularity.

Childbearing literature deserves widespread interest ­­­­­because childbearing is one of those major life experiences that unifies us all – we were all carried and birthed. It also provides important insights into the human experience, teaching us about love, loss, the boundaries (or lack of boundaries) between the self and others, the significance of bringing another life onto this earth and the meaning that can be found in deciding not to bear children too.

6. What can poetry offer to the literature of childbearing, compared to other forms of writing?

Poetry’s ability to distil complex ideas and emotional responses in relatively few words makes it particularly well suited to elegantly expressing the enormity and complexity of childbearing experiences. Its concentrated form also makes poetry a bit easier to read and write than long-form genres when you are in the thick of childbearing experiences and have very limited time and energy. Childbearing poems can feel raw and real as a result – they evoke the moment so vividly because they are often written in the moment.

Poetry also seems more able to capture and embrace uncertainty and ambivalence than other genres of literature, perhaps because of the freedom it enjoys from narrative and argument. This is a strength for writing about childbearing, because many people going through childbearing experiences have a complex and sometimes conflicting mix of emotions and felt senses, for example joy alongside exhaustion or intense love at the same time as frustration.

Because of its focus on metaphor-making, which is about drawing connections between things, poetry is also an artform uniquely placed to express what it means to be in relationship. This is a real strength when writing about childbearing. Childbearing is inherently about being in relationship with the children we carry and give birth to, or lose, or imagine but don’t carry. It also often changes our relationships with various other aspects of our lives, including our bodies, families, work, creativity, communities and society.

7. How important is childbearing in our society and culture? Are there stereotypes around this?

I’m a white Anglo settler Australian, living on Wurundjeri country in the northern suburbs of Naarm/Melbourne, and my response to this question is informed by my experiences of carrying and giving birth to two children in this particular culture and society. I think my society and culture has a complex and complicated relationship with childbearing.  At an individual-to-individual level, my personal experience has been that many people acknowledge that childbearing is fundamentally important and give extra attention and care to those in the midst of various kinds of childbearing experiences. I’ve enjoyed much warmth and generosity during my pregnancy and postpartum periods not only from the microculture of my immediate friends and family but also from members of my neighbourhood and community I wasn’t previously close to. Some people still hold stereotypical beliefs and ideas around childbearing though, and I’ve occasionally been on the receiving end of comments which reveal expectations that I should have a much more significant role in raising our children than my male partner.

Unfortunately, our societal systems of maternal care and parental support don’t adequately reflect the importance of childbearing. Modern western hospital maternal care prioritises risk minimisation and hospitals’ operational needs over womens’ and pregnant peoples’ needs, which leads to more intervention than is necessary and can detract from the transformative potential of birthing experiences. There are also too few publicly funded continuity-of-care models, which allow pregnant people to see the same maternal healthcare professionals repeatedly and to build a relationship of trust before birth. Further, the lack of systemic supports for new parents (including adequate paid partner leave) leaves some people feeling quite alone and isolated during their postpartum period.

8. How does family contribute or become involved in the process?

In ideal circumstances, a person’s or a couple’s (as the case may be) family can play a fundamentally important role during pregnancy and the postpartum period. They can contribute by providing love and emotional support during difficult times, food and other forms of care, and childcare so that carers can have a well-earned break.

9. Are women’s labour and bravery given equal weight to men’s in society?

We are moving away from the binaries of men and women, so I find it difficult to talk about labour and bravery along gender lines and to say a certain kind of work or a certain form of courage is male or female. Trans men and non-binary people can be childbearers for example, and there are poems by poets with these identities in What We Carry. In my view and experience, childbearing isn’t given equal weight or respect in our society to work that privileges and favours those without childbearing roles and responsibilities. And within literature, genres that celebrate bravery often associated with men such as war literature have historically been more widely appreciated and deemed to be of broader relevance than literature celebrating the labour and courage of childbearers.

10. What realisations did you or others around you experience through childbearing?

The most important realisations I’ve had through my childbearing experiences have been embodied learnings and discoveries. I experienced prenatal anxiety during my first pregnancy and through seeking professional help and using contemplative and relaxation practices such as meditation and rest, I’ve learnt to better accept uncertainty and my lack of control over most things, and to access a place of calm within myself in difficult times. I have also learnt to listen to, work with, and have greater trust in my body, which made my second pregnancy and birthing experiences calm, healing and very empowering. Childbearing has also deepened my capacities for patience, compassion, and love and has made me feel more connected to my body, family, community and the more-than-human world.