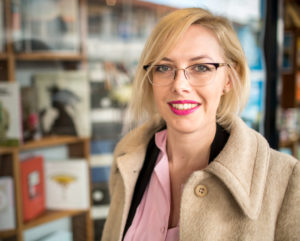 Q1. Angela, your last two years in publishing have consisted of being part of a team to set up Echo, an imprint of Bonnier Publishing Australia. This was to allow Echo to build an adult publishing list, while its sister imprint, Five Mile Press, continues catering for children. What was it like to be in at the beginning of an imprint and list, under the auspice of international companies, Bonnier Publishing and Bonnier Books?

A1. It has been an incredible experience. My role is a commissioning editor, but since I’ve been part of Echo from the ground floor it’s meant I’ve also been a project manager and have made suggestions and worked with the other members of a small team on other aspects of the business (strategy, branding, etc.). There were three of us commissioning from the start, but I developed the Australian fiction list, and have also commissioned some nonfiction. So far, I have project-managed all my books, but soon I will be focusing more on just acquiring and commissioning (and still structural editing and development at that level of the manuscript, which I find immensely satisfying). I’m very proud of what we’ve built so far, and excited by the responses we’ve received – awards, reviews, sales (including international rights). We have an ever-increasing load of submissions. It’s been a ridiculously busy two years.

Q2. What elements inform the way you are building your publishing list?

A2. I work closely with Echo publishing director Kay Scarlett, and also the sales and marketing team who also work across Five Mile. So I obviously don’t make decisions on my own. But I’ve been very fortunate to have been supported in my vision from the start. I was given some instructions to start with, and then I strategised ways to build out from there (particularly with the fiction list). Some of Echo‘s through-lines are: stories of resilience and resistance, dark underbellies of society (and people), the beauty and light as reasons to push through, social issues, and often books that are a bit too ‘bold’ for other commercial publishers. We do take risks. Including signing books that aren’t ready, but that we have faith in (including fiction), and then working on them closely. (I hope your readers will not see that as an invitation to send us unfinished books… ha. Usually these are ones I’ve found in some other way than via the submission pile.) What would be the point of publishing into a very full market if we weren’t doing something a bit different?

Q3. Can you tell us about your greatest successes, and what you think has led to their success?

A3. I want to say: watch this space. There are things I can’t talk about, yet! But let me mention Resurrection Bay by Emma Viskic, which won an unprecedented four crime awards in one weekend. It’s now out in audio book, too, and will be published in the UK and US by Pushkin. I remember how fast my heart was beating when I first read it. And recently we published our first YA book, Ida, By Alison Evans. Although it’s too early to tell its ‘success’ in any traditional way, I think it’s already one of our most successful books in the way it’s being talked about, and the readers it’s reaching. It’s a sci-fi with queer and genderqueer characters. I love reading the reviews and seeing all the teenagers (and up) talking about it on social media. The Books+Publishing review called it a ‘landmark’ publication in Australian YA. This is the kind of thing you can do when you take risks.

Q4. What has been your most exciting book?

A4. All of them (I love all my children equally!). But keep your eyes peeled for The Tattooist by Heather Morris, and The Fortress by S.A. Jones…